What is the malt?

Malt is one of the main base materials for beer production. Its quality is vital to the technological process of beer production with fundamental importance for attainment of required chemical structure, organoleptic features and colloidal stability of this drink. Any of a variety of cereal grains, including rice, wheat, oats and rye can be used to make malt. The most common by far, however, is barley, which is the primary grain used in the production of most beers and the majority of malted whiskeys as well.

Malt is germinated cereal grains that have been dried in a process known as "malting". The grains are made to germinate by soaking in water, and are then halted from germinating further by drying with hot air. Malting grains develop the enzymes required to modify the grain's starches into sugars, including the monosaccharide glucose, the disaccharide maltose, the trisaccharide maltotriose, and higher sugars called maltodextrines. It also develops other enzymes, such as proteases, which break down the proteins in the grain into forms that can be used by yeast. Malt also contains small amounts of other sugars, such as sucrose and fructose, which are not products of starch modification but were already in the grain.

From the barley to the beer 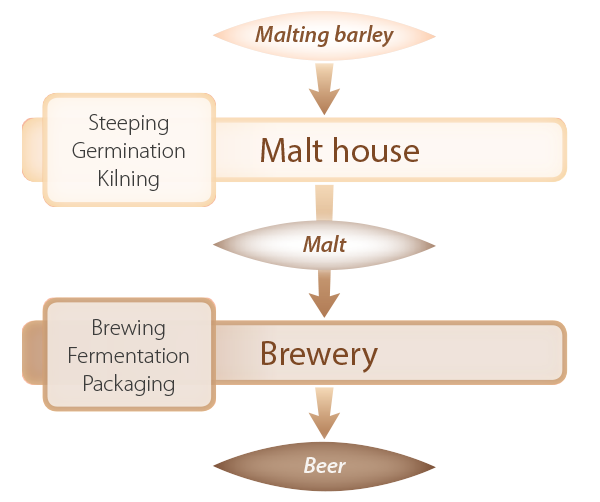 Of primary importance for production of quality malt is the use the first-class of 2 - row spring malting barley. It depends not only on which malt variety is used, but also upon the uniformity and maturity of the corns.

The production programme itself starts with barley soaking, which helps to wash the barley grains as well as activates vital processes in them. The aim of soaking is to increase the constitutional water content, which is essential for vital potential of the grain, and to reach the vegetation water content necessary for germinating and enzymatic reaction progressing. Germinating of barley is not initiated until a certain water content.Individual parts of the grain imbibe water in different ways. As for the time, the quickest absorption occurs in the first 4 to 8 hours of soaking. The water uptake depends on the temperature of water used for soaking (the warmer the water, the quicker the absorption), on grain characteristics. The water has to be changed several times as products of the initiated grain metabolism are released in water and, at the same time, oxygen is being exhausted. In practice, grains are repumped many times between several soaking tanks. There is always some dirt in the first steeping water and glumes, dust and lighter grains wash out. After being dried, this waste product makes forage for animals. The whole soaking process takes about 48 hours in our maltingplant.

The aim of malt germinating is activation of the enzymatic system in grains, synthesis of enzymes and reaching the required modification according to the type of the produced malt at limited vegetation. Germinating is a physiological process during which germs of rootlets (chits) and leaves evolve in the germinal part of the grain using the reserves of endosperm. The energy needed is provided by breathing. The burnt material is mainly starch.To ensure constant germination, the barley layer needs to be turned mechanically. A long rootlet grows on the corn on the third or fourth day and the most important stage of germination begins – "the youth stage". At this stage, breathing is most intensive and enzymatic changes, called modification (enucleation) of the grain, are initiated. This is followed by the "heap aging stage" during which the layer of the barley is aerated, thus preventing mutual root entangling. The "old wilted heap" is the final stage in the seventh day of germination. A "green malt" is obtained and transferred for kilning.

The aim of kilning is to reduce the water content to 4 or even 5 % in light malts, to stop vegetation processes, to partially reduce some enzymatic activities and to establish gustatory, colour and oxidoreduction agents. The green malt has a high content of water and is not storable. An appropriate temperature treatment is needed to stop the enzymatic activities and even partially inactivate certain enzyme groups and to ensure conditions for reactions creating gustatory and coloured substances. During drying and kilning, the optimal characteristics of malt are ensured by relations between the increasing temperature and decreasing water content in the grain. Malt drying and kilning proceeds in three phases. In the first stage, which is called the growth stage, the grains are able to keep on germinating.. Then the "enzymatic stage" which results in suppressing of the vegetation process but not enzymatic reactions. For the third stage – the so-called "chemical reaction" – making the enzymatic reactions stop. The chemical reactions are still active, though, creating coloured and gustatory substances.

The last task is to ensure the correct storage of the malt and to prepare it for the dispatch to customers. 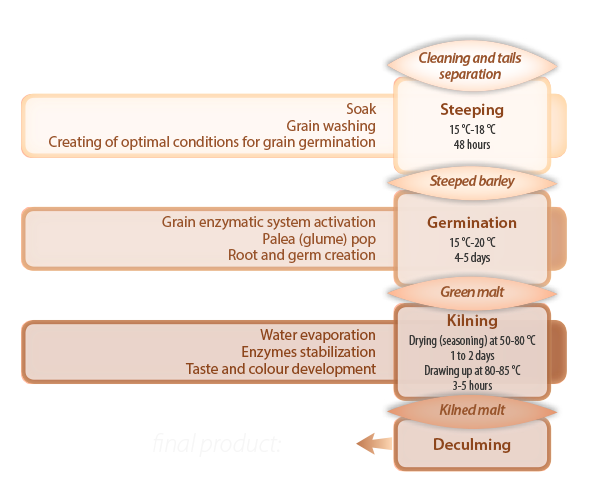 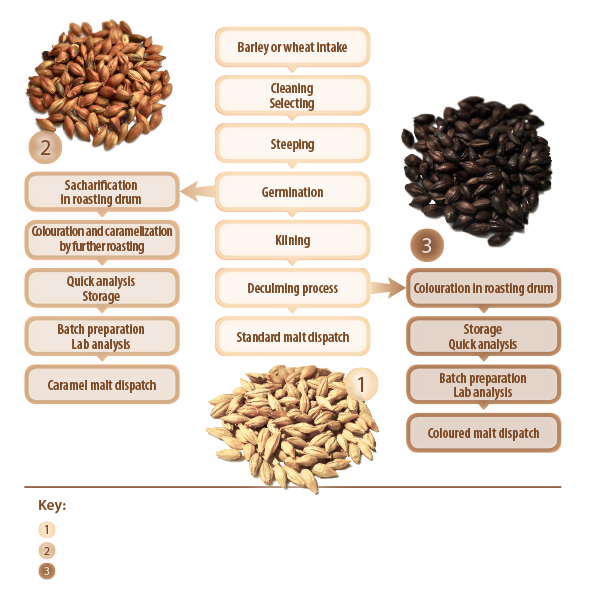 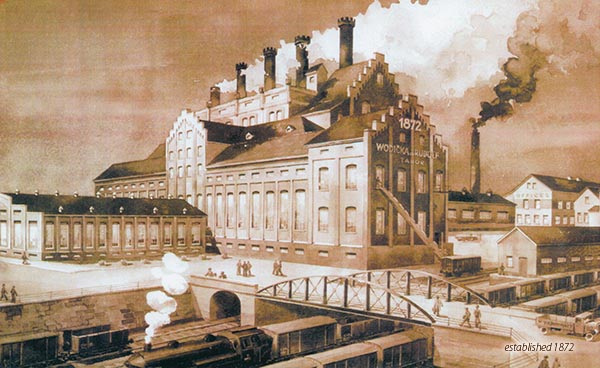 1. Railway transport
The most common means of malt transport on the Continent. For the transport of loose malt, we use special vehicles for cereals which can be loaded up to 50 t, according to the type of vehicle.

2. Truck transport
The most progressive means of transport. Truck transport is mainly used for customers who cannot or do not wish to receive malt in wagons; it is also used if a just-in-time system is arranged with the customer. Loose malt is transported mainly in special silo trucks (tanks) that can accomodate around 25 t of malt.

3. Containers
Containers are used mainly for deliveries to distant customers, especially for overseas tranport. The advantage is easy manipulation with the container and the wide range of container transport services available all around the world. Czech and Moravian malt houses, the malt is mainly loaded loose into containers, but the loading of malt in sacks is no exception. We usually load 20 containers with more than 17 t of malt.

Bulk Loading
At present, bulk malt forms more than 95 % of our malt supplies. In the malt house, the malt is freely loaded onto the transport and unloaded directly onto a silo prepared by the customer. Bulk malt can be transported in wagons, trucks, containers or in greater volumes on river or sea ships. The advantage of such transportation is optimum utilization of the capacity of the carrier, and more effective malt storage and manipulation of the malt in the brewery. However, to stock bulk malt, the customer has to have available the corresponding storage capacities in - silos.

Bags
Bags represent the traditional packing materials for malt deliveries. At present, for deliveries of Czech malt, we usually use polypropylene bags with polyethylene insets with a capacity of 50 kg net weight, which ensure sufficient protection against impacts. Bags are used mainly for destinations with no reloading device or lacking in a device for the storage of loose malt. The disadvantage is complicated and labourious manipulation, and greater demands on the storage capacity. 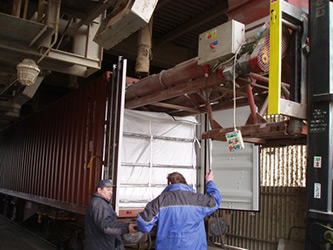 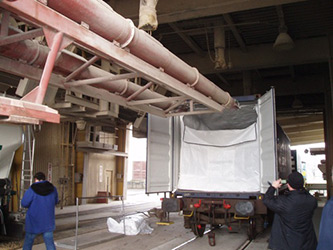 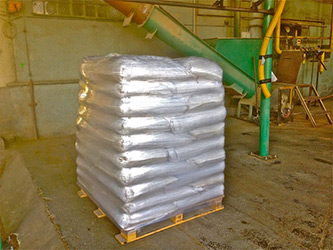 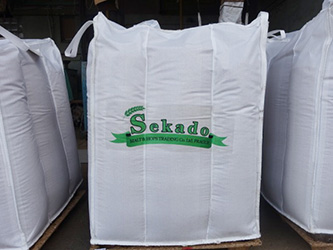 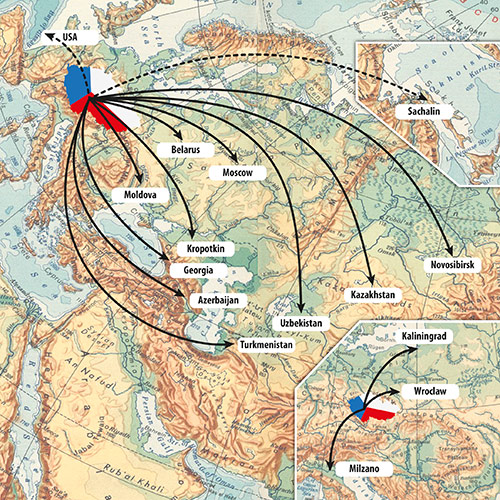